BUY DIRECTLY FROM THE INVENTOR!

"UNBEATABLE PRICES ON TRAPS AND SHIPPING"

Beginning as a fur trapper in 1966, in what became an all encompassing interest in everything trapping, Jim’s devotion to catching animals quickly grew from a hobby into a vocation and so much more.  Not a job, his passion became a 24-7 way of life in anything connected with trapping.  As a teenager, he started out catching muskrats and raccoons near his home in the foothills of the Adirondacks where his family had settled in the late 1700’s.  If Jim wasn’t setting traps or talking trapping, he was literally dreaming about more efficient methods or coming up with ways to modify and improve existing equipment.  For fifteen years he was a “state hopper,” gaining valuable experience trapping all sorts of wildlife in places like Quebec, Virginia, Colorado, Alabama and California.  Concentrating on beaver and bobcats, he also trapped raccoons, fox, otter, muskrats, coyotes, you name it.  In Virginia Jim worked for the pulp companies as well as the Lake Anna Nuclear Power Authority controlling problem beaver.  Driven to catch anything in sight, his father always said, “Jim can catch anything that walks, crawls, flies or swims.,” from bare-handing trout, swimming down 30 pound snapping turtles, catching all kinds of frogs, tadpoles, snakes, butterflies etc., with the patience and perseverance to catch them all in his hands.

In 1978 Jim broke the ice  with his first trapping article, “Southern Beaver,” in which he shared his experiences in taking 432 beaver with a partner in thirteen weeks in Virginia.  Always interested in equipment, he would provide information on new products as well as supplying detailed explanations of how he altered traps of all kinds to suit his needs.  Over the years he has written many dozens of articles for virtually all of the trapping publications, experiences on the trapline and  ‘how to.”

Returning to his native New York in the early 90’s, Jim began a nuisance wildlife control business, again concentrating on beaver, while expanding to include squirrels, woodchucks, skunks, raccoons etc.  Having transitioned from the use of conventional tools of fur trapping to live cage traps for much of his ADC work, Animal Damage Control, he first employed standard trapping methods with what he considered to be outdated equipment.  “Bait and wait,” setting slow, gravity operated, single door cage traps, while using bait in the back of the trap was the accepted program.  Jim would change all that by incorporating his own methods and utilizing the equipment he created in combination to yield a “superior system.”

Understanding the need for improved methods, in time Jim began using positive den sets, traps set over den sites, with his own double door traps in the most productive “system” ever developed. With no need to attract an animal to a trap with bait, he simply brought the traps to the animals.  Traps set at den sites will intercept animals in their daily routines, while they move from one location to another.  These second to none methods were now ready to be matched up with the worlds most effective traps.

THE NEED FOR BETTER CAGE TRAPS

When Jim began ADC work it was obvious there was room for better equipment,  traps that would not only catch critters like raccoons, woodchucks or armadillos, but traps to hold up, without breakage, traps that were essentially escape proof.  Jim set out to tackle all three key elements needed to create a versatile, solid, cage trap.  He would first replace the pan triggers found on virtually all live cage traps with his patented wire trigger system.  Second, he added power to the doors so that the doors would close quickly, helping to prevent “back outs.”  Adding pressure to this trigger would mean that the traps would work when set in any manner, right side up, upside down, sideways and vertically, with no wrong way to place them, the most versatile traps on the planet.  Third, Jim beefed up all of the components to produce a trap with no breakable parts in a unit that is essentially escape proof.

These patented live cage traps have now passed the certification process in Canada making them legal devices in Canada, the UK, the EU, Russia and the U.S.

PRODUCING THE
MOST DURABLE,
RELIABLE,
PROFESSIONAL
GRADE OF LIVE CAGE
TRAPS IN A VERY
HUMANE PRACTICAL
LIVE TRAP THAT
ANYONE CAN USE
WITH CONFIDENCE.

With all of the twists and turns associated in the development of the wire trigger, powered door Comstock Cage Traps so many have come to rely on, it’s truly amazing these traps exist.  A dream for at least a decade before the first prototype came together and then years before it all came to fruition, Jim built the first wire trigger cage trap in 2001 taken from a small re-triggered, retrofitted commercial cage trap. A pan type trigger was removed from the trap and swapped out for a modified wire trigger taken from a body gripping trap. The body gripping trigger, as is, would have little value. Jim saw a way to stabilize the wire trigger and make it function in a cage trap by adding power. He had invented the first “power wire trigger ” cage traps. With a mechanical mind, he engineered many more working models of powered wire triggered traps. They all worked. The first traps would not have been practical to reproduce commercially, common to the vast majority of prototypes in all inventions.
Jim could see that along with the power wire trigger, powered doors would be key to the “better mouse trap.” Though the trap with the new trigger performed quite well, no pan to avoid, many hundreds of hours would be spent in trial and error, experimenting, to produce a trap with a simple wire trigger and fast power doors.
Two years later, 2003, Jim made the first swim through beaver traps, four and a five footers, 45 and 59 pounds. They were bulky, heavy and a bit unstable and so were only used a few times, though they did have potential and did catch beaver! With plans to change to a lighter cage wire material with framing, the traps were just waiting to be improved!
Entering into two separate consecutive arrangements in an effort to speed the development process, Jim realized that “his baby” was not going to become a reality unless he stayed on the course he had mapped out in his own vision of the better cage trap. 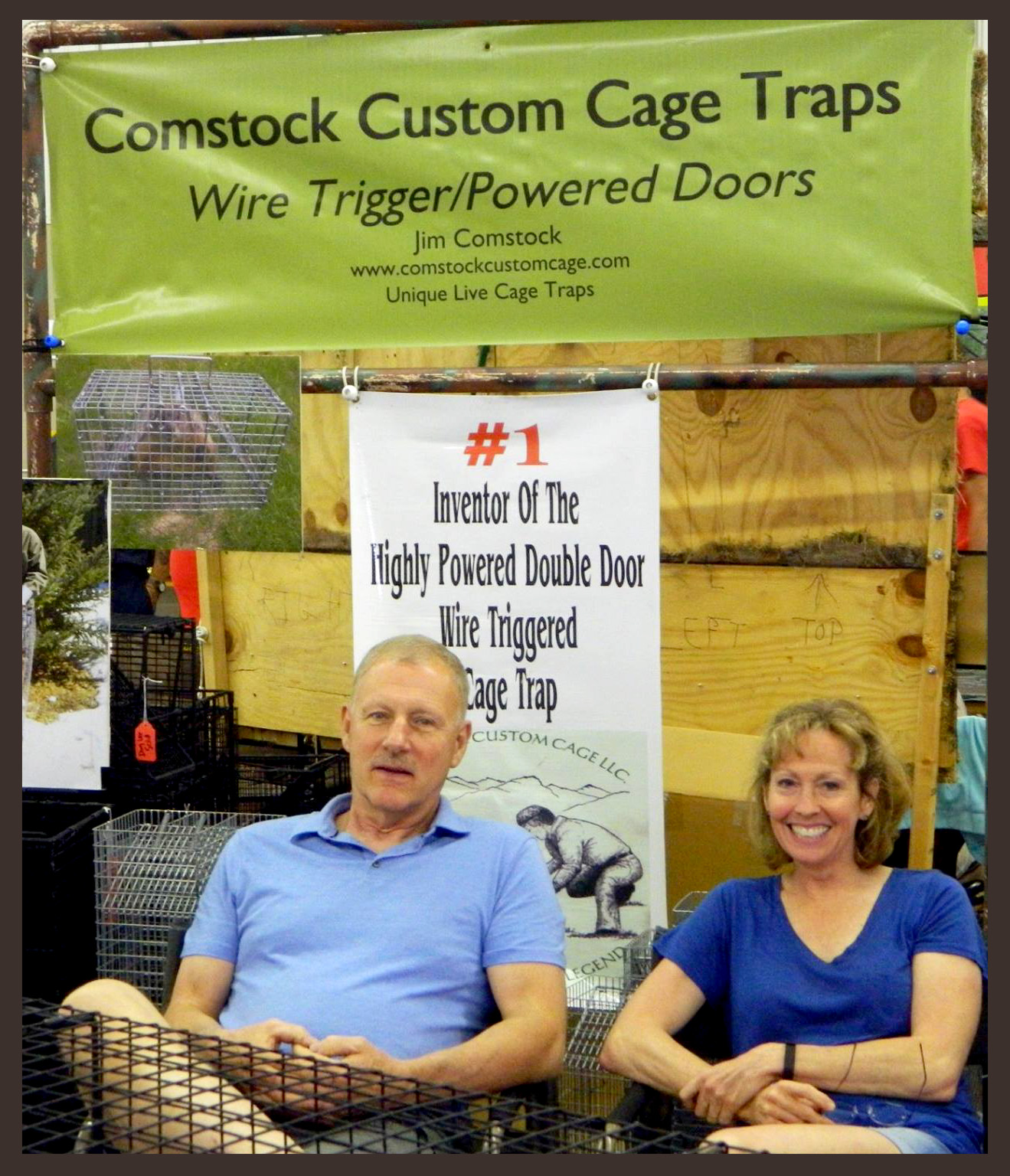 The wire trigger/powered door cage traps, which duplicated the function of body gripping traps, would become reality only if he did it.   Early partners had different ideas, so Jim stayed focussed on his dream, determined to see it through to completion. Now years into the project, he made the decision to devote 90 days, beginning January 1, 2010 to build a new trap using the knowledge he had accumulated. Having abandoned the body grip trigger element entirely to invent a new trigger made specifically for these cage traps, he first re-configured the powered door and powered lock bar bar system to be used with a new trigger that, at that time, existed in principle only. Just hours before the self imposed deadline arrived, a crude, but working trigger was installed into a completely new trap. Improvements came quickly to the new trigger, changes that have ostensibly remained intact to date.  The first traps were produced for market in April of 2010. By fall Jim had received so many requests for the beaver trap slated for winter, he just started building them, with a plan to improve as time permitted. Remarkably, as the saying goes, “if it ain’t broke, don’t fix it.” The traps worked so well, exceeding expectations, outside of minor improvements, those traps have remained as they were from day one, with many trappers taking hundreds of beaver in them in a short time.

SEE THE DIFFERENCE FOR YOURSELF, TRY A COMSTOCK CAGE!